Bajaj Allianz Life ideated the plank initiative in 2018 with the purpose of enabling people to achieve their life goals through healthy living.. Through the plank initiative, Bajaj Allianz Life emphasized on getting one’s health and life goals done, in keeping with the message, ‘Good health leads to Life Goals Done’. Over the two editions, Bajaj Allianz Life spearheaded and popularized the plank movement and also earned itself two ‘Guinness World RecordsTM feats for the most number of people holding the abdominal plank position for one minute. Bajaj Allianz Life, through its plank initiative, has strived for collective participation for better health and fuelled the unconventional life goals of Indians – Staying Fit and healthy. At the same time, the Company has also associated itself with noble societal causes during both the editions of plank movements - The #36SecPlankChallenge in 2018 and #PlankForIndia in 2020

On 12 September 2018, Bajaj Allianz Life unveiled a uniquely engaging #36SecPlankChallenge initiative, on the back of the launch of Bajaj Allianz Life Health Care Goal, a critical illness product covering 36 critical illnesses. The initiative began with a video asking viewers to hold a plank, and challenge their friends for a healthier world. Viewers were asked to shoot a video holding a plank for only 36 seconds and upload it using the hashtag (#36SecPlankChallenge) on any social media platform. Participants could then tag their friends and family, and ask them to do the plank challenge. For every hashtag, the insurance company contributed monetarily to Hrudaya Cure A Little Heart Foundation (Hrudaya Foundation), a Hyderabad-based healthcare organization dedicated towards curing heart disorders of disadvantaged children.

This plank challenge campaign became viral within a week and saw active participation from sports stars including Saina Naiwal, Geeta Phogat and Deepa Malik, fitness enthusiasts like Rannvijay Singh and Bani J, CEOs and several corporate leaders from all over India. Overall, the plank challenge campaign witnessed participation of 1.2 lakh people across the nation within just two months, while reaching an audience of 11 million across social media platforms.

#36SecPlankChallenge initiative culminated with the first ever Bajaj Allianz Life Plankathon on 25 November 2018, at Pune’s AFMC Ground. This plank challenge event was spearheaded by Shilpa Shetty Kundra, where 2,353 participants set a new Guinness World Record feat for ‘Most people holding the abdominal plank position’ together for one minute.

On 9 January 2020, Bajaj Allianz Life brought back the second edition of its plank initiative, another viral sensation with #PlankForIndia. The second edition raised the bar for two reasons - First, for every plank challenge video recorded and uploaded on social media channels, the company contributed monetarily towards the training and development of India’s emerging sports stars. Second, through the cause of supporting India’s future athletes, the company also encouraged more people to keep themselves fit for achieving their Health and Life Goals.

On 26 January 2020, Bajaj Allianz Life once again created history during the second Plankathon event held at Mumbai’s MMRDA Grounds. It set a new Guinness World Records with 2,471 people simultaneously holding the abdominal plank position for one minute. The second edition of Bajaj Allianz Life Plankathon was spearheaded by Bollywood actor and fitness enthusiast Anil Kapoor, who urged everyone to set and achieve their health goals. Enthusiastic participants from varied professional backgrounds took part in the event, making the second edition of Plankathon a smashing success.The #BajajAllianzLifePlankathon video had over 3.2 Million views across Bajaj Allianz Life social media channels. 6 Million + views if you see the views on Influencer channels. The campaign had a reach of over 1.28M people during its duration. 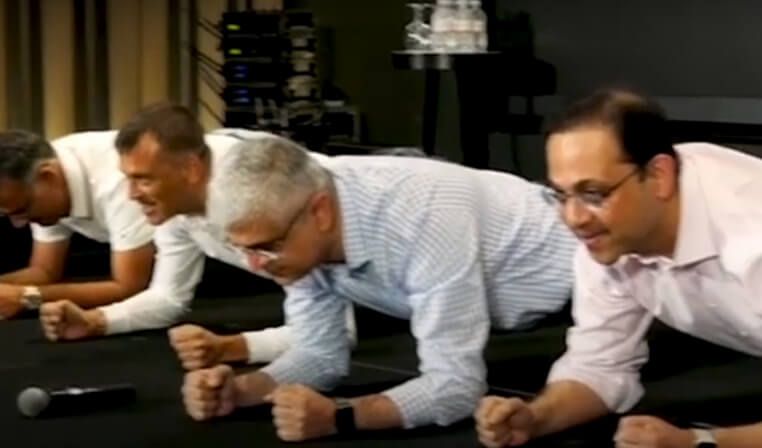 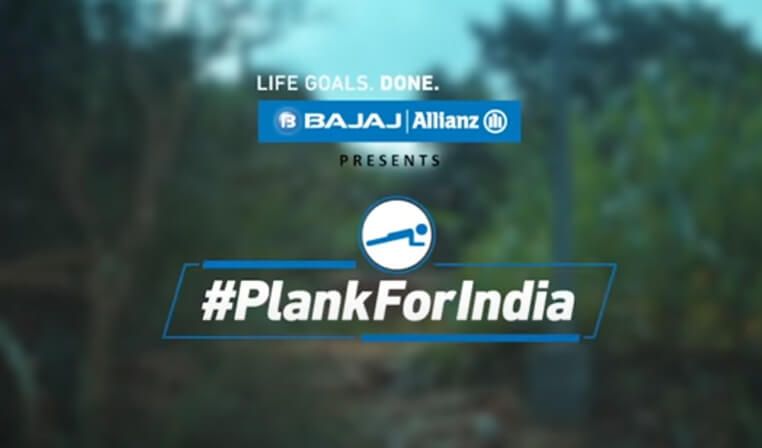 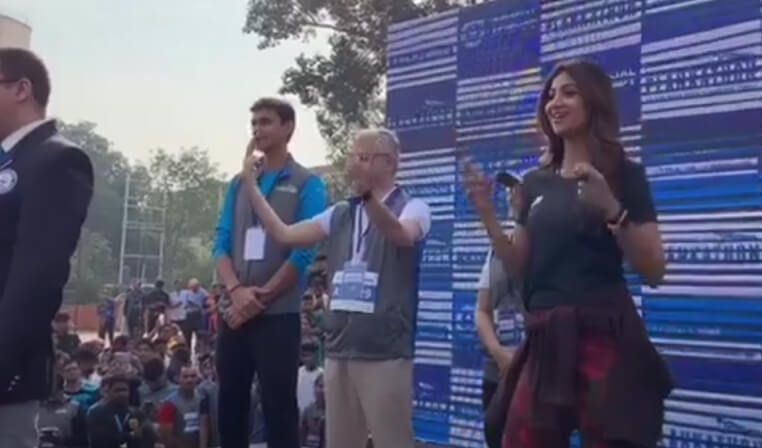 Participate in the #BajajAllianzLifePlankathon with Shilpa Shetty Kundra 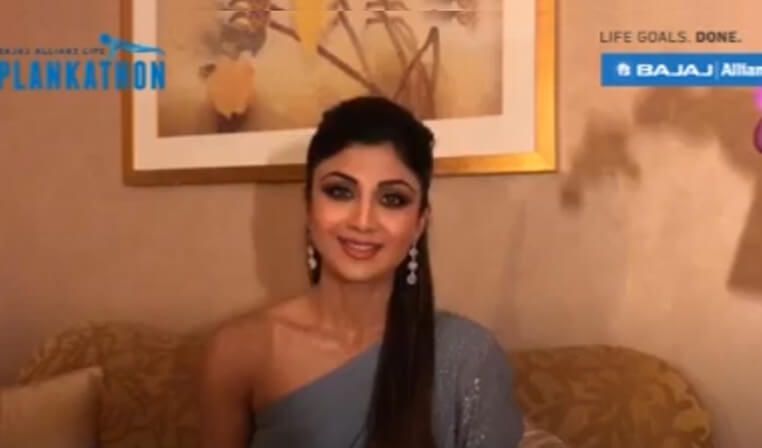 Promote Healthy Living With The #36SecPlankChallenge This World Heart Day 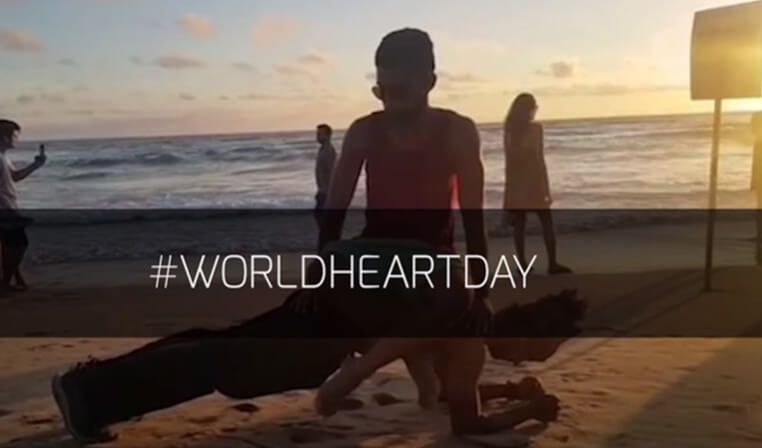 Have us
call you

⭐ What is the aim of the Bajaj Allianz Life Plankathon initiative?

Bajaj Allianz Life believes that uninterrupted health is the key to achieving life goals, and good health goes a long way in realizing them. In this light, Bajaj Allianz Life launched the Plankathon initiative designed to encourage and drive people towards healthy living for achieving their Life Goals. At the same time, the initiative was aimed at contributing towards social causes such as curing heart disorders of disadvantaged children, and training and development of emerging athletes in the country.

Planking initially began as an internet fad, but quickly turned into an ideal exercise for abdominal muscles, where you have to maintain a position similar to a push-up for as long as possible. With the most common variation of a plank being the forearm plank, to get into the plank position, you have to hold yourself in a push-up like position, supporting your body weight using your forearms, elbows and toes. Planking is also ideal for working professionals who want to keep themselves fit, but do not find enough time to go to the gym

⭐ What are the different types of planks?

There are different variations of a plank, with the most common being the forearm plank. A few other common variations include:

Side Plank: Unlike the forearm plank, where the weight of the body is borne on both forearms, the side plank is executed with one forearm on the ground, while you keep your heel to shoulder as straight as possible and hold the position, resting your other hand on your hip.

Side Plank With Leg Raised: Even higher on the difficulty scale is the side plank with your leg raised. Once you get comfortable with your balance while doing a side plank, you can then slowly raise your leg up and lower it back down, while keeping your focus on control and accurate movements.

Plank With Elevated Feet: This variation is similar to a forearm plank, but you would need to place your feet on an elevated platform, such as a box, bench or a step. This increases the difficulty level of the exercise, and you have to ensure that your body forms a straight line from your shoulders to your heels.

Extended Plank: Extended plank position is similar to that of a forearm plank, where your elbows should be a few inches in front of your shoulders, with your body forming a straight line from your head to your ankles. However, while performing the extended plank, you have to extend your arms or hands forward as much as possible, thereby substantially increasing the difficulty level.

⭐ How long should I hold the plank position?

If you are a beginner, you are advised to hold the plank position for ten seconds, then relax for five to ten seconds, and then re-engage for ten more seconds. It is advised to repeat each set anywhere between three to six times. However, once you get comfortable holding the plank position, you can increase the duration, and for best results, you can hold three planks for up to one minute (60 seconds) each.

⭐ What are the health benefits of planking?

There are several plank benefits. Some of them include:

Strengthening your core: Through planking, you can improve your core strength, considering the fact that the position works on all the four muscle groups in the stomach.

Increasing muscle definition: Considering you have to hold the plank position for a while, it also strengthens muscles in your shoulders, legs, chest and back. Thus, its functionality, along with the isometric hold builds lean muscle in your body, thereby increasing their muscle definition.

Helps with back pain: Once your abdominal muscles get stronger, your body stops overusing and overextending the back muscles, and relies more on the stronger core for everyday activities and exercises, which in turn reduces pain in your lower back region.

Gives better posture: By ensuring that your spine and your mid-upper body muscles are strong, you can achieve better posture. Through planking, you can engage your back, chest, shoulders, abs and neck, thereby naturally adjusting to your original body’s alignment.

Stress buster: You can increase the difficulty level as much as you want, and through the physical activity, endorphins are released, which reduces stress and tension.

Planking is regarded as one of the most effective ways to burn calories, considering it is a very effective abdominal strengthening exercise. Not only does it increase your core strength, but it also improves your posture and flexibility. Furthermore, planks also boost metabolism, which helps in sustaining higher levels of calories being burnt while resting.

⭐ How many calories can I lose while performing a plank?

Depending on your body weight, it is possible to burn approximately two to five calories per minute while performing a plank (Source: Healthline)